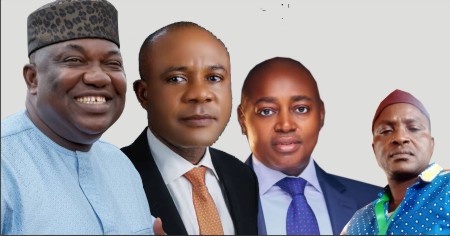 The recent threat to peace and security of Ndi Enugu especially the kidnapping incidences along Ugwogo-Opi road which was widely reported both in the social and main stream media wrenched the hearts of not quite a few in and around the country as well as the global community. For one, the global community is currently more than before united in purpose and concern about the existential threat to global peace and harmony posed in the main by non state actors and agents of lucifer who takes joy in inflicting pains to the physique of others.

Another important factor why several people were alarmed at the current spate of security threat especially in Enugu State has to do with the uncommon sacrifice which the administration of Gov Ifeanyi Ugwuanyi has made ever since it came to power to secure the lives and property of Ndi Enugu making Enugu State the most preferred destination of choice for both investors and merry seekers. Enugu State has had the reputation of the most peaceful state in and around the country and especially in the South East Geopolitical Zone and no fewer than fifteen socio-political groupings, leaders of thoughts, media organizations both in the country and the diaspora has extended this important recognition as well as the confernment of most peaceful Governor award on Ifeanyi Ugwuanyi. This recognition is only an affirmation of the doggedness, diligence and audaciousness of the Governor Ugwuanyi’s administration to confront non state actors and rein them and their unpleasant activities for the good of Ndi Enugu and its visitors. With the recent spike in kidnapping incidences and other unwholesome vices, Enugu has been set on the part of destruction and her reputation as the most peaceful state where everyone is trooping into to relax and do business in being shattered.

In it’s news report by Vanguard newspaper regarding the current happenings in Enugu titled “Enugu in trouble, kidnappers everywhere”, the anchor reporters chronicled the evolution of kidnap for ransom incidences in the state which came to a head punultinate week where several persons including returning students of the University of Nigeria and other commuters were abducted in broad daylight following the increase in traffic along Ugwogo-Opi road as a result of the near total collapse of the old Enugu – Ninth mile – Benue road. The report came short of alluding the complicity of the security personnel who manned different portions of the long stretch of the road in the entire saga. This might be understandable given unconfirmed confession of some of the victims who bluntly pointed accusing fingers in the direction of the security operatives who had mounted several roadblocks in many parts of the state. Again, if the letters of the report were to be taken highly seriously, many victims of the past and present incidences have pointed in the direction of the murderous Fulani herdsmen who might have infiltrated the state from different areas as perpetrators in chief with the active connivance of some megalomaniac locals.

One is actually worried also that despite the onerous sacrifices made by the peace loving governor of Enugu state in the areas of security of lives of citizens of Ndi Enugu and its visitors, some megalomaniacs are actually bent in rubbishing the gains by the government to create panic in the minds of the populace especially as the journey for the 2023 general elections hots up. One thing is also clear and which stands as an eternal truth in this. Those who engage in crime and criminality shall have their day before the just Judge of the universe. It is also heart warming that the people’s governor is not resting in the cosy comfort of his office couch. This must not be the best of times for him as a leader given the narrative of the recent happenings in his domain. It is hoped that his recent tour with relevant security heads in the state at the probable hideout of the perpetrators of crime will not only yield good results towards deescalating tension posed by the dare devil kidnappers but restore confidence in the people about the effectiveness of their leader to ensure peace and security in the land.

Fact is that security is everybody’s business but government must show sufficient lead in the fight against insecurity and other criminality. The people must also cooperate by forming local vigilante groups to augment the efforts of the regular security forces, after all a man surrendered by a common enemy should endeavor to ward off the enemy at all times. Those locals who derive joy in opening their backyards by conniving with criminal elements against their own for pecuniary reasons must understand that they will eventually have their day before their Maker and every single thing they might have ridiculously gained will be vain.
It is important to entreat the federal government of Nigeria whose responsibility it is to rehabilitate the Enugu – ninth mile – Benue highway to do so without further delay as to reduce the traffic pressure on the only existing bypass that connects Enugu State with the rest of the northern region.

we all have a collective responsibility to ensure that Enugu State remains in the hands of God.