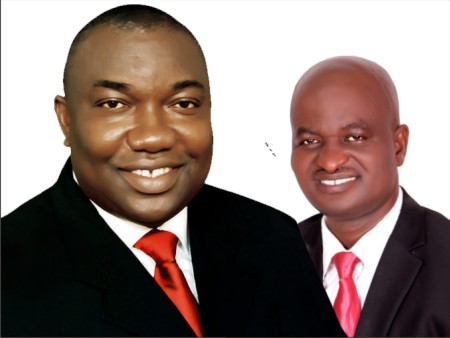 I AM PROUD TO BE IDENTITIFIED WITH GOVERNOR UGWUANYI’S DEVELOPMENT STRIDES IN ENUGU STATE AMID CHALLENGES……..

The Special Assistant to the Governor of Enugu State on Information and Communication, Sir Simon Martins Okechukwu has extolled the good quality leadership and developmental strides of Governor Ifeanyi Ugwuanyi of Enugu State, across the entire State, saying he is proud to be part of the success story of the developments.

Speaking with journalists after the monthly expanded PDP meeting held at Nimbo in Uzo-Uwani Local Government Area, Okechukwu challenged the youths of the council area that the only way to appreciate Governor Ugwuanyi’s developments across Enugu State, most especially in Uzo-Uwani Local Government Area, is to see that all the Candidates of the Party, PDP are voted in come 2023.

He further went down memory lane and thanked the people-oriented and visionary administration of Governor Ifeanyi Ugwuanyi of Enugu State who is working his talk by his first term inaugural address.

According to the Special Assistant, Okechukwu, he said that during His Excellency’s inaugural address says “This administration will pay much attention to the rural areas because the majority of the people comes lives in the rural areas, he further stated that his administration will developed and equiped Nsukka, the University town, which was founded half a century, to enable it compit with other University towns in Nigeria.
“This PDP meeting presented a veritable opportunity to some of us, his aides to informed our people what His Excellency, Rt Hon. Dr. Ifeanyi Ugwuanyi was able to achieved with this seven years on, which is anchored on peace and good governance, despite the avalanche of challenges befalling the state and the country”.

According to the Special Assistant, he said that it would be recalled that the economic confidential in its 2019 Annual States Viability Index, released in 2020, listed Enugu among the six (6) economically viable States in Nigeria that can survive without federal allocations. Which Enugu alongside with Lagos, Ogun, Rivers, Kwara and Kaduna as viable States,
Okechukwu said that Enugu, which, according to the index report, generated N31 billion compared to Federation Account Allocation (FAA) of N103 billion representing 29 percent, was good enough to beat all oil producing states except Rivers.

He also recalled again that in 2020, “the National Bureau of Statistics (NBS) published its 2019 states’ ranking in Internally Generated Revenue (IGR). One of the states which recorded impressive performances, according to the report, was Enugu.
Enugu State, with no oil, was the 9th best performing State in terms of IGR. Its slightly over N31billion was also good enough to beat all oil producing states except Rivers, Delta and Akwa Ibom under the leadership of His Excellency, Rt Hon DR Ifeanyi Ugwuanyi”.

According to him, he said that prior to these remarkable ratings, Enugu State was rated by the World Bank Group as the second most advanced State in Nigeria on the Ease of Doing Business and third on the Ease of Starting Business.
“The State was listed by BudgIT alongside Lagos and Rivers as the only three States out of the 36 States of the federation that have fulfilled obligations to their workers. It was also listed among the seven States that are solvent with impressive over 30 percent Internally Generated Revenue (IGR) to fund additional economic activities, by Economic Confidential” all these are evidenced that our Governor is doing well and we shall continue to be proud of him as we are going to vote for him to represent our people in the Senate come 2023″. Sir Okechukwu emphasized.

He stated and charged that not minding all the challenges, His Excellency, Rt. Hon. Dr. Ifeanyi Ugwuanyi, immediately moved into action, reconstructed and rehabilitated Opi-Nsukka dual carriage way.

Six years after its construction, the Opi-Nsukka dual carriage way with functional street and traffic lights, which is the first time in the his Nsukka, serves as one of the signature projects the governor will be remembered for after his tenure.

In spite of the economic, security and public health challenges confronting the country since he assumed office, according to the Special Assistant, “he superlatively delivered first Enugu State government’s flyover bridge at T-Junction, Nike Lake Road in Enugu East Local Government Area;

Sir Okechukwu further enumerated some of the important projects started and completed by Governor Ugwuanyi’s Administration, which includes, the 26.66km road of Ukpabi-Nimbo-Ugbene-Ajima-Eziani-Nsukka, grading of 40km road of Onubeogbo-Uvuru-Ukpata-Adaba-Umulokpa road leading to the Headquarters of Uzo-Uwani Local Government Area,
the 5,000 Seat capacity of Nsukka Township Stadium, he reconstructed and remodeled undulating 11km Miliken Hill-Ngwo-9th Mile Road, he started, completed and commissioned the Enugu State Customary Court of Appeal, Enugu and other unprecedented infrastructural interventions in the State Judiciary; he pointed others to include the State Secriariate Annex, Ede-Oballa, Nsukka with a modern Conference Centre adjacent to it; the 31km Udenu Ring Road and numerous road projects in the rural areas of the State.

These include the Ebonyi River Bridge, Ikem, Isi-Uzo LGA; the newly established Enugu State Infectious Disease hospital, Enugu; the Type-3 Healthcare Centres including one at Nkpologu-Uvuru road, and other health facilities across the State and most importantly, the ongoing massive developmental projects at the newly established State University of Medical and Applied Sciences, (SUMAS), Igbo-Eno, Enugu State etc, He stated that there are some of other milestone achievements of Governor Ifeanyi Ugwuanyi that will outlive his.

He finally appeal the youths of Enugu State and our elderstatemen and women to continue to pray for His Excellency, Rt. Hon. Dr. Ifeanyi Ugwuanyi and our Gubernatorial Candidate for our Party, Barr. Peter Mbah and other candidates for the 2023 general elections.
Because with God everything is possible.

Truly! Truly!! Enugu State is in the Hands of God.

Honourable Special Assistant to the Governor